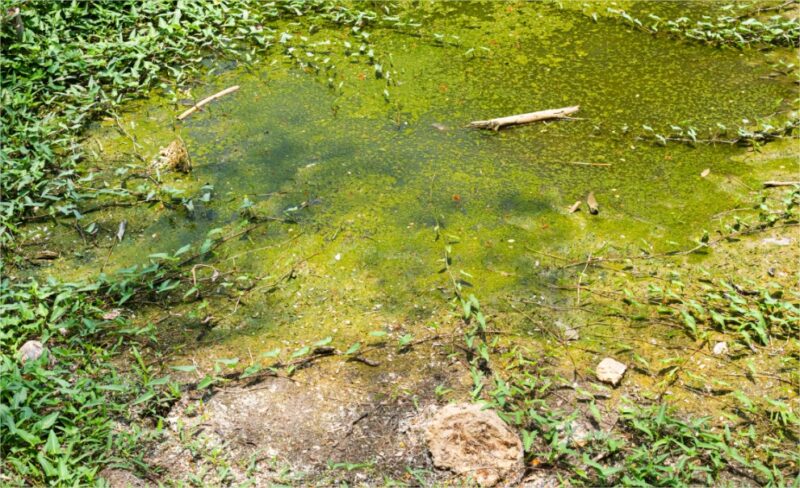 Algae are basic photosynthetic creatures that resemble plants and are found primarily in aquatic habitats. Protista is the kingdom that includes algae. Pigmentation and food reserves are used to classify them.

Algae can be as small as two micrometers (in the case of micro-monas, a type of green algae) or as tall as 200 feet (in the case of some giant sea kelp species). Algae can be found in pond scum, seaweed, and giant kelp. they can live in numerous habitats including saltwater, freshwater, wet soil, or on moist rocks. Large algae are referred to as “simple aquatic plants” in general. Algae constitute the cornerstone of the food chain in aquatic environments because they are primary producers. They provide food for a variety of marine species, such as brine shrimp and krill, which in turn provide sustenance for other marine animals.

The growth process of algae is the same regardless of hue, and it is controlled by photosynthesis. This simply means that algae must be exposed to sunlight to grow. The sunlight’s energy is mixed with carbon dioxide and water to make glucose, which provides a source of energy for the algae and allows them to develop. Algae development is a completely natural process.

Through the alternation of generations, algae can reproduce sexually, asexually, or by a combination of both mechanisms. Asexually reproducing creatures divide spontaneously (in the case of single-celled organisms) or release motile or non-motile spores. When specific environmental stimuli, such as temperature, salinity, and nutrients, become unfavorable, sexually reproducing algae are often driven to create gametes. These algae species will either generate a fertilized egg or zygote that will develop into a new organism or a latent zygospore that will activate when exposed to favorable environmental conditions.

It, like many things in nature, can harm other life in the area. While you’re unlikely to locate enormous kelp in your pond, you may find a variety of algae. Algae can wreak havoc on water quality, reduce oxygen levels, emit foul odors, and discharge poisons into pond water. Pond algae, at its worst, can kill fish and other species that live in the water it grows in. Humans and pets may get harmed (and possibly die) as a result of it. Although some species of algae in ponds may not pose a direct threat to the health of pond-dwelling animals, they can alter their appearance. In other words, not all algae will harm your pond or lake.

It’s crucial to know what kind of algae you have in your pond. It is crucial to note, however, that too much of any species of algae (except diatoms!) can be toxic, resulting in algal blooms and fish deaths. This is why knowing what algae is present in your pond and taking the required steps to restrict its growth is a vital part of the proper pond and fish care. The following are the seven (7) most common forms of pond algae:

Planktonic algae float on top of the water in your pond. The type of algae is free-swimming. The color of this algae varies, but the variety that causes your pond water to turn green or brown is the most prevalent. The presence of this algae in your pond might generate an unpleasant stench. Each alga consists of a single-celled organism.

This type of algae uses sunshine, carbon dioxide, and nutrients to grow and reproduce. These nutrients can be found in fertilizer, leaves, and uneaten fish food and fish feces, among other places.

Planktonic algae can limit the oxygen in your pond’s water. Aquatic species in your pond may perish if there isn’t enough oxygen. Some species of this algae are potentially hazardous to both animals and humans.

This type of algae is commonly found in new ponds where there is no existing ecology to keep it under control, even though it is very easy to eradicate. It may take hold and grow swiftly since no aquatic plants or animals are competing for resources. Anabaena, Chlorella, Pediastrum, Scenedesmus, and Oocystis are some of the most commonly seen planktonic genera.

Filamentous algae and blanketweed, on the other hand, are bigger types of algae. Pond scum, also known as filamentous algae, looks like long threads that entangle and create mats on the surface of your pond, where it has risen from the depths. Filamentous algae can also be found on rocks, logs, and the edges of your pond. This algae’s filaments resemble green threads or hair, but they’re a chain of connected cells.

String algae, like most species of green algae, are an important food source for young fish, ducks, and aquatic insects, as well as a source of oxygen. Their proclivity for forming mats can cause problems such as clogging water filters and pumps, obstructing sunlight, consuming dissolved oxygen, producing ammonia (which can subsequently be converted into potentially dangerous nitrates and nitrites), and ultimately decreasing water quality. Filamentous algae can be controlled by using naturally existing bacteria, vacuuming/raking out any mats, and frequently monitoring your water quality to avoid algae overgrowth. Although, because filamentous algae blooms are too huge (and can be too adherent) to be removed by UV pond clarifiers, manual removal is frequently the recommended option, to begin with.

Manually removing pond scum, on the other hand, may cause spores to be discharged back into the water, resulting in the formation of more algae. Spirogyra, Cladophora, Rhizo-conium, Mougeotia, and Zygnema are some of the most common filamentous algae genera.

Cyanobacteria, sometimes known as “blue-green algae,” is a microorganism that develops on the water’s surface similarly to algae. Until it reproduces and matures into bloom, it’s too little to see with the human eye.

They favor nutrient-rich shallow, warm, quiet water…in other words, they thrive in sick, low-quality aquatic habitats! They form dense, scum-like floating mats on the water’s surface and come in a variety of colors, including the traditional blue-green, green, yellow, purple, and brown. You most likely have cyanobacteria bloom if your pond or lake has a strong, unpleasant odor with algae-like mats that are thick and slimy.  Conducting a water quality test is another way to determine whether you have an overabundance of cyanobacteria (the presence of some cyanobacteria is normal and not harmful), poor water quality with low oxygen and high nitrogen levels is a good indicator of cyanobacteria presence, especially if accompanied by a foul odor and dead or dying/unhealthy fish. Wear protective equipment such as rubber gloves and waders when testing your water since cyanobacteria carry toxins that can be hazardous if touched or consumed.  Cyanobacteria can cause a variety of health problems, so limit your exposure and properly clean yourself and your clothing if you come into touch with any.

Cyanobacteria offer certain ecological benefits when their numbers aren’t out of control: some fungal and lichen species have created a symbiotic connection with cyanobacteria, allowing the bacteria to reside in their roots and help fix nitrogen into a form that the plant or fungus can use.

Muskgrass, also known as Chara algae, does not appear to be your average algae. Because they have structures that resemble leaves and stems, this type of alga is sometimes mistaken for a submerged plant. These aren’t genuine leaves or stems, and they don’t have reproductive systems (such as ovum or flowers). Other than creating a pungent odor akin to garlic (thus the name musk grass) and, like other algae, being prone to overgrowth, it isn’t thought to be particularly harmful to pond health. It’s even dubbed “filter algae” since it naturally filters toxins and adds dissolved oxygen to the water. Muskgrass is a common food source for ducks, and it also serves as a habitat for aquatic insects, which are eaten by fish. Their rhizoids, or root-like structures, also help to anchor silt at the water’s bottom, preventing murky water.

Because of its branching, flower-like appearance with leafy ends, Nitella algae is sometimes mistaken for submerged aquatic plants and pond weeds. Nitella will also not grow above the water’s surface.

Nitella, unlike Chara, has no odor and is not crunchy. It has a gentler feel to it.

Stoneworts, also known as Nitella algae, are unlikely to harm your pond or cause any negative water quality issues. It also has no real value as a source of food for wildlife. However, it can provide cover for insects and invertebrates, which supply food for pond fish such as koi, birds, frogs, and other species.

Green water algae can make ponds look like pea soup, but they are also a natural and healthy food source for a variety of species.

Green algae, which belong to the Chlorophyta family, are the most varied group of algae, with over 7,000 species. As the base of the food web, these algae can be found in most healthy pond and lake ecosystems. Their chloroplasts contain both chlorophyll A and B, which accounts for their vivid green appearance, yet they can also be yellow. Green algae are primary producers, generating oxygen and energy/nutrients that are then used by organisms that are unable to make their own. They provide food for a variety of critters, from fish to insects to ducks. In contrast, as previously indicated, too much green algae (typically as a result of nutrient-rich water) can cause eutrophication, which can lead to oxygen depletion and the death of your pond’s residents, especially during the summer months. Controlling the growth of green water algae before it reaches this point is critical, with UV clarifying, water dyes, and proper filtration and maintenance being the most effective treatments.

Euglena, which belongs to the phylum Euglenophyta and the family euglenaceae, has 54 genera and over 1,000 species and is extraordinarily diverse and adaptable, able to thrive in each water body on the planet as well as most moist soil types. This sort of algae, which is usually green or red, maybe rather worrisome — and with good cause. You won’t know if euglena is present until a bloom appears, which is often vivid crimson. These blooms are extremely hazardous, and unless they are controlled, fish and vegetation will perish. Because most euglena species are resistant to physical or biological treatment, you’ll have to either completely drain your water body and replace it with fresh water, or use chemical products to eradicate the bloom. Copper or sodium carbonate are frequently used in the most effective chemical controls for euglena. Chemical controls have the potential to affect the flora and wildlife in your lake or pond, which has been explored in earlier articles. Euglena has no known benefits other than showing poor water quality and hence signaling that something needs to be done.

Algal blooms are likely to emerge and spread as a result of a variety of environmental variables. However, the exact combination of elements that generate algae blooms is unknown. However algae blooms can be attributed to any of the following:

Next article How does a natural swimming pool work? 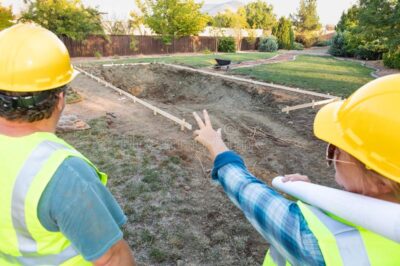 Does Homeowners Insurance Cover an Above Ground Pool? 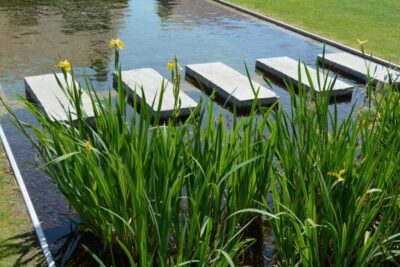 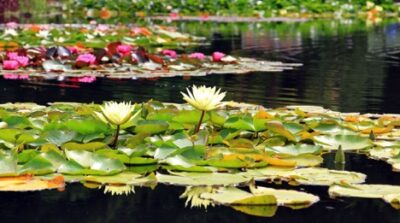 Does a wildlife pond need a pump?

August 9, 2022
There are no comments yet No comments