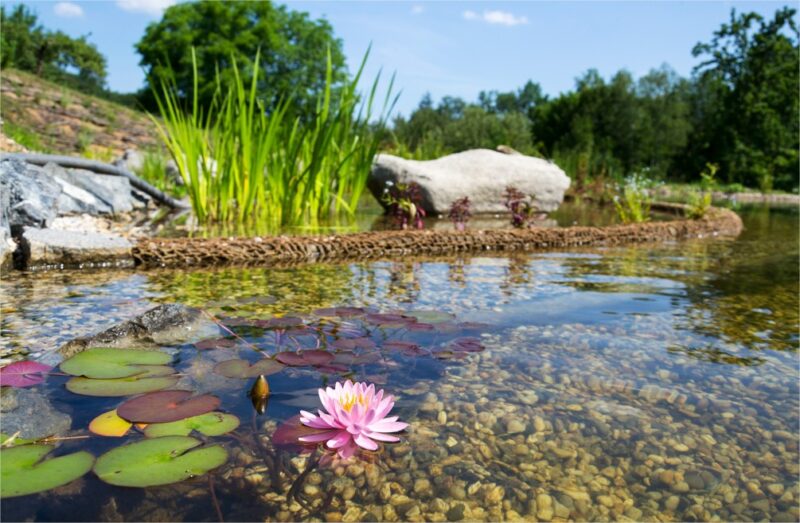 How does phyto-purification work? Phytodepuration: Water Purifying Plants How to purify wastewater with aquatic plants? Is it efficient? Of course, it is! It is a solution to the future! We produce on average 150 liters of wastewater per day. Why not use it to benefit aquatic plants that love to grow like cattails, reeds, willows, …

Also called lagooning, phytodepuration is a sustainable alternative to individual purification plants. These solutions of purification do not have authorizations of phyto-purification everywhere.

Due to increased environmental awareness among the population, strengthened supervision, and the enactment and enforcement of strict environmental laws by the government, the number of treatment plants for domestic and industrial wastewaters has increased dramatically over the years, especially in urban areas.

Furthermore, It is a solution that deserves recognition. It is easy to maintain and cheaper than a septic tank or a traditional treatment plant. In other words, the collection of wastewater or organic waste is not a problem in cities.

Most homes have a sewer system. In rural areas, it is rare and some lands require specific solutions. The treatment plant by phytodepuration is a solution particularly more common in the countryside.

History of Phyto-Purification By Plants

Using plant materials as natural coagulants to reduce toxicity in wastewaters has been a common practice since ancient times. Soldiers in Peru used powdered roasted grains of Zea mays as a way of settling impurities in the 16th and 17th centuries.

How Does Phyto-Purification By Plants Work?

In fact, how does it work? Phytodepuration is based on the principle of natural bacteria. Moreover, These bacteria are present in the root system of aquatic plants. Aerobic bacteria (those that need oxygen and do not smell) feed on organic matter and “excrement”.

These bacteria transform these nutrients into mineral matter that can be assimilated by plants (nitrogen cycle). Then, the aquatic plants provide oxygen to the bacteria. Also, it is necessary to reinforce the oxygenation of a phyto-purification zone to improve the degradation of the waste.

The wastewater is sent to lagoon areas (planted areas). These lagoon areas are filled with phytopurifying plants (see list below) that can absorb pollutants such as nitrates or phosphates. Also, These individual purification systems reproduce a natural purification ecosystem.

In phytodepuration, there are often three main zones:

Which Plants to Choose in Phyto-Purification?

The main classes of aquatic plants are listed below in order of importance and applicability in built wetland systems:

Here is a list of plants to be used in phytodepuration with good absorption of heavy metals and nutritive elements like nitrogen, phosphates, and nitrates.

The herbaceous annual wetland plant Acorus calamus belongs to the Acoraceae tribe. It is native to South Asia (especially India), Central Asia, and Eastern Europe, and it has a wide distribution in temperate and sub-temperate climates. The rapid growth of Acorus calamus, especially in waterlogged and nutrient-rich soils, makes it an obvious candidate for use in wastewater treatment systems.

The Alisma aquatic genus is mostly present in the northern hemisphere, where it grows along the muddy margins of marshes and wetlands. Alisma, or common water-plantain, is a shoreline plant with lance-shaped leaves and several tiny pale lilac flowers that bloom from June to August.

Each flower has three petals and three sepals and is arranged in a pyramid-shaped inflorescence that stands taller than the rest of the plant. Water-plantain is a beneficial species in wetlands because it can stabilize metals in the substrate while still being consumed by animals.

The branches of inflorescences and in- fructescences are larger than double the maximum lengths of 4.5 and 7 cm for wild plants. Instead of genetic modification, these changes contribute to fertilization and plant density regulation.

Flowering rush (Butomus umbellatus L.) is an endemic aquatic and wetland plant that can form monotypic stands in both emergent and submerged environments. By limiting leisure (boating, fishing, and skiing) and undermining agricultural usage of water supplies, this plant will quickly outcompete natural plants and obstruct human activities.

C. palustris is an early flowering, winter-hardy plant in wetlands and can be a part of biosystems. Plants of C. palustris can be successfully grown in the natural clay-peat substrate on building terraces and balconies as part of an electro-biosystem with daily watering and, in theory, obtain energy directly from the building.

Carex is a large genus of perennials with triangular, grass-like stems and flowerheads’ panicles in small spikes of over 1,500 varieties. The majority of species are found in moist environments such as bogs or humid forests. A Carex genus can accommodate about any garden condition.

Cyprus longus is a native of coastal wetlands, though it is much more frequently famous as an introduction, reaching as far north as central Scotland. It’s marketed as a pond plant for gardens. It stands up to 1.5 meters tall and has long spikes of black or reddish brown glumes.

Hippuris can withstand cold temperatures, as shown by its current occurrence at 2000 meters in the Swiss Alps. It is only found in the Northern Hemisphere, in temperate, boreal, and sub-arctic climates. It is the only species in the Hippuris genus, which is the only genus in the Hippuridaceae family.

Iris pseudacorus, versicolor, … (and its variants)

Rushes are plants in the Juncaceae family that belong to the genus Juncus. Rushes prefer pond edges, bogs, and other low, moist areas. They thrive in wet soils and are dependable farmers in a variety of water environments. Rain gardens, bioretention, and other features where water temperatures are unpredictable benefit from their ability to withstand occasional dry spells.

Purple loosestrife (Lythraceae), also known as Lythrum salicaria L., has a wide variety of benefits. It has been used as a medicine for millennia and has been regarded as a medicinal plant since ancient Greek and Roman times. Its phenolic compounds, mostly tannins, are responsible for the majority of its pharmacological action.

It is a rhizomatous perennial herbaceous plant that grows up to 90 cm long. The stems have a square cross-section, are green or purple in color, and are hairy to nearly hairless. The rhizomes are fleshy, wide-spreading, and have fibrous roots. The leaves are ovate to ovate-lanceolate in shape, measuring 2 to 6 cm long by 1 to 4 cm wide, green (sometimes purplish), opposite, toothed, and hairy to nearly hairless.

This semi-aquatic plant thrives in swamps, peat bogs, ditches, humid meadows, and lake banks. It prefers to be in the shade, but it can develop in the sun as well as fully in the shade.

Up to 1.5 m long, upright to spreading floating marginal perennial aquatic vegetation. The foliage is hemlock-like, and the stems are hollow and reddish in color. Threadlike segments separate the submerged leaves finely. Still and slow-moving water bodies, marshes, and seasonally flooding wetlands are its natural habitat.

Phalaris arundinacea cultivates for forage and fed to ruminant livestock as silage or grass fodder. The plant has also infiltrated natural wetlands, necessitating the implementation of expensive protection measures.

Humans have used phragmites for thousands of years. Some uses, such as the production of schnapps, coffee, and vessels, are no longer as common as they once were. Current reed applications have four categories: industrial, energy, agriculture, and water treatment.

Mentha cervina, also known as Preslia cervina, is a mint that grows wild in stony areas and along riverbanks in the Iberian peninsula’s northwestern regions. It has a significant history as a culinary herb in Portugal, mostly in the inland areas, such as along the “Sabor” river rather than along the sea coast, to aromatize river fish-based dishes.

Ranunculus has a wide range of characteristics, but its evergreen leaves are usually 5-lobed and easily distinguishable from other plants. It has leaves that emerge in the autumn and fade away by early summer after flowering, but a few small ones will often last all summer.

Wetland improvement, regeneration, and construction are all popular uses for Sagittaria latifolia Willd. It’s a C3 genus and has an origin in southeastern Canada and the eastern half of the United States. It supports waterfowl by providing shelter and food, as well as improving water quality in wetlands.

Freshwater wetlands, such as hardwood swamps and floodplains, stream margins, rocky pond shores, freshwater coastal wetlands, and floating mats, are home to Saururus cernuus. It is a wetland indicator plant and is famous as an obligate wetland plant. Saururus cernuus can be present in various habitats, ranging from soils and environments that are constantly and permanently wet.

Scirpus lacustris is a PERENNIAL tree that can reach a height of 2.5 meters (8ft 2). From June to August, it blooms, and the seeds ripen from August to September. Wind pollinates the species, which is hermaphrodite.
It can thrive in either semi-shade (light woodland) or full sun. Also, It grows well in damp or wet soil and can grow in water.

The narrow-leaved cattail, Typha angustifolia, grows in brackish and saline marshes along the edges of wetlands, rivers, and dikes where there is freshwater seepage.

The emergent perennial herb Veronica beccabunga has horizontal or ascending stems that root at the nodes. The plant has succulent, hollow stems that root and crawl around the ground at the base and are smooth and glossy in appearance. Also, It has pairs of short, stalked, oval-oblong leaves that are around 1 1/2 inch long, thick and leathery in texture, and have strongly jagged or sinuated edges. Two flowers grow from the upper leaf axils of each pair of leaves. Flowers with blue petals and a white eye are 2-4 inches long and about five millimeters high.

Proteins, nutrients, vitamins, and bioactive compounds are Z. latifolia seeds, and their functions, such as antioxidant activity, have been studied. East Asian countries are home to Zizania latifolia. For over 3000 years, the seeds of Z. latifolia (Chinese wild rice) famous as a cereal in China.

What are the advantages of phytodepuration?

This solution has several positive points. It is ecological and uses natural methods. Significantly It is a durable, reliable, and efficient system that you can easily integrate into your garden landscape. If this solution works well, it will give off very little odor.

This solution is applicable on a large scale for less than 2,000 inhabitants to replace conventional wastewater treatment plants. Significantly, this is the case in the municipality of Betrix in Belgium.

In the natural environment, wetlands play an essential role in the river, lake, and pond water purification. Phytodepuration is a system in which plants treat wastewater. In contrast to the mechanical solution, we are in an autonomous system.

The phyto-purification was born from the inspiration of natural wetlands. It replaces traditional sanitation’s physicochemical processes with a natural purification method as close as possible to nature.

There are also other sites specializing in phytodepuration:

Previous article How To Create Your Own Natural Swimming Pool With Aquatic Plants?

Next article Koi Pond Maintenance: How to take Care of a Koi Pond? 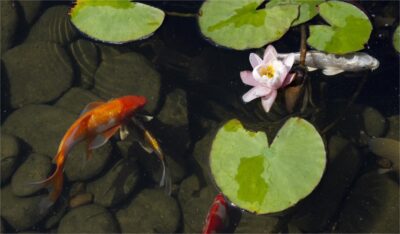 When you have a late start, keep your pond healthy

What Type Of Pond Liner Is Best For You? 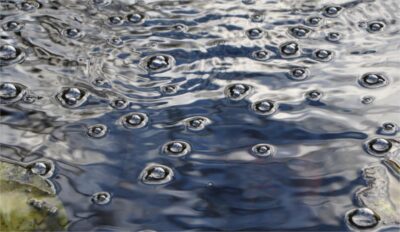 How to Get Rid Of Smelly Pond Water & Bad Pond Odors